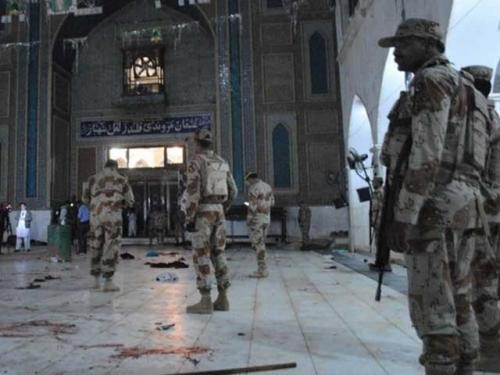 An anti-terrorism court (ATC) in Karachi sentenced to death on 18 May 2020 two convicts for their involvement in the 2017 Sehwan Sharif bomb blast.
ATC-16 announced the verdict against Nadir Ali and Furqan at Karachi Central Jail, further awarding life imprisonment to Ali for the possession of ammunition and explosives. The court has also imposed fines on both the convicts.
According to the police, the accused had been identified by the eyewitnesses and judicial magistrate Mushtaq Ali Jokhio through CCTV footage.
The blast at the shrine of Lal Shahbaz Qalandar in Sehwan Sharif killed as many as 82 people and left hundreds of others injured on 16 February 2017. The convicts had reportedly carried out recce of the shrine with the suicide bomber a day before the explosion.
In his statement to the court, Jokhio had identified Ali and said that he had confessed to facilitating the terrorists. The convict had told the magistrate that he rented a room in Sehwan a day before the blast, while also inspecting the tomb of Lal Shahbaz Qalander from the inside to make the bombing successful.
The shrine’s caretakers had also identified the convicts, claiming that they had seen them congratulating each other in the parking lot.