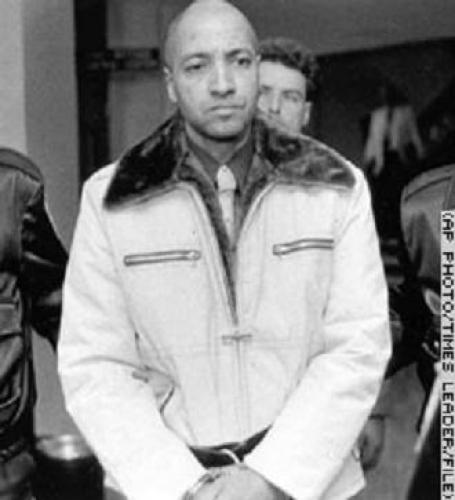 a judge has ruled that a former prison guard convicted of killing 13 people in a 1982 shooting rampage can't be executed because he is mentally ill.
George E. Banks is delusional, psychotic and has no capacity to assist in his own defense, Luzerne County President Judge Michael Conahan ruled on February 27.
"Banks cannot make rational choices because of his major mental illness, cannot rationally comprehend his death sentences, has a hopeless prognosis and will not improve to any acceptable degree," Conahan wrote.
The U.S. Supreme Court held in 1986 that it is unconstitutional to execute the insane.
Banks picked up his AR-15 semiautomatic rifle on September 25, 1982, and began shooting. He killed seven children -- five of them his own, along with his three live-in girlfriends, an ex-girlfriend, her mother and a bystander in the street.
The state Supreme Court halted Banks' execution in December 2004 and ordered a competency hearing. Banks, disheveled and seemingly oblivious to the proceedings, sat in a cell adjacent to the room where the hearing was held.
Psychiatrists testified that Banks believed his death sentences were vacated by Jesus or God, that nurses and other staff are witches and devils, and that he was illegally incarcerated because of a conspiracy involving the Department of Corrections, the "Islamic government of the U.S." and others.
His lawyers have said mental illness played a role, though the trial jury rejected an insanity defense.
Psychiatrists testified at the competency hearing that Banks has the delusional belief that he has been pardoned and that his psychosis prevented him from making sound decisions.
District Attorney David Lupas said he will likely appeal. Prosecutors already have appealed a previous ruling by Conahan that barred one of their witnesses from testifying at the competency hearing.