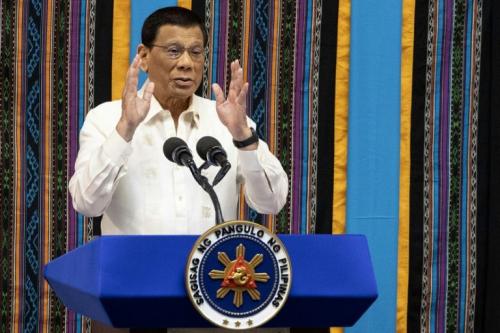 Philippine President Rodrigo Duterte said on 27 July 2020 drug offenders should be executed by lethal injection, in a fresh push for the death penalty as part of his anti-narcotics crackdown that has killed thousands.
In a wide-ranging State of the Nation address, Duterte also admitted the government's response to the coronavirus epidemic had been "far from perfect" as the number of infections surged past 82,000, with nearly 2,000 deaths.
Duterte had been expected to use the annual speech to lawmakers to lay out a roadmap for recovery after the economy contracted with millions of jobs lost during more than four months of a nationwide lockdown.
But he provided few details.
Instead, he took the opportunity to once again push Congress, which is dominated by his allies, to restore the death penalty -- an unrealised plank of the tough-on-crime platform that helped get him elected in 2016.
It comes weeks after he signed an anti-terrorism law that critics and rights defenders fear will be used to target government opponents.
"I reiterate the swift passage of a law reviving the death penalty by lethal injection for crimes specified under the Comprehensive Dangerous (Drugs) Act of 2002," Duterte told a drastically reduced audience of legislators, wearing face masks and sitting far apart because of the virus.
The UN Human Rights Council called last month for an independent probe into the drug war that it said had unleashed widespread and systematic killing with "near impunity" for offenders.