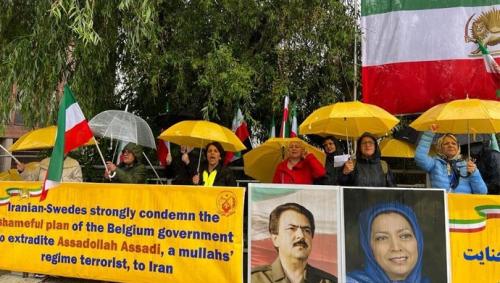 Global firestorm brewing over Belgium’s disgraceful, secret deal with Iran’s regime
While the Belgian Parliament Foreign Relations Committee leaned on the government-led coalition vote to adopt a recent bill to exchange prisoners with the Iranian regime, a completely different development has been gaining unprecedented global attention. An international campaign has been launched to shed light on Brussels’ illegitimate agreement with Tehran, resulting in tensions even during Belgian parliamentary sessions on July 5 and 6.
U.S. Senator Robert Menendez, Chairman of the Senate Foreign Relations Committee from the Democratic Party, whose position, and those of his colleagues, casted a long shadow over the Belgian Parliament Foreign Relations Committee session on Wednesday, emphasized on accountability for Tehran considering its long record of supporting terrorism and hostage-taking.
Senator Ted Cruz, a senior Republican member of the same Committee, harshly denounced Belgium’s kneeling before Iran’s regime as the world’s most active state sponsor of terrorism.
Rep. Dan Bacon, a member of the U.S. House of Representatives Armed Services Committee, highlighted the fact that the Iranian regime’s terrorists have been found guilty based on due process and called on the Belgian Parliament to scuttle ny prisoner exchange with Tehran.
Thirteen other members of the U.S. House of Representatives from both sides of the aisle issued a letter to the Belgian Prime Minister Alexander De Croo calling on him and his government to remain committed in campaign to rid the world of terrorism.
“We urge you to lead the Belgian Parliament in rejecting any deal between your government and the Islamic Republic of Iran that would return the terrorist, Asadollah Assadi—or any other convicted Iranian terrorist, for that matter—to the homeland,” the signatories wrote.
The Belgian opposition, the New Flemish Alliance, referred to the Iranian regime’s 43-year-old record of using hostage taking as means to do business with the West, adding that the Belgian government’s agreement with such a regime will fuel the continuation of this modus operandi.
Belgian MP Darya Safai described Wednesday’s adoption of the bill in the Belgian Parliamentary Foreign relations Committee as a “dark day for Belgium” that will result in the weakening of Belgian security in the face of the mullahs’ demands. Brussels must be ashamed, she added, asking those who voted for the bill: “Can you look at yourselves in the mirror?”
Theo Franken, another Belgian MP, underscored the undeniable reality that four decades of appeasement has passed its test and failed. “The more you appease the mullahs, the more you will intensify their terrorism.”
Peter De Roover, the opposition party leader, called on the government to heed the warnings of the many international dignitaries who have raised the alarm over the consequences of appeasing the mullahs and releasing their terrorist diplomat.
Assita Kanko, MEP from Belgium, described the deal as “a pact with the devil” and warned of future terror attacks against Europe.
The global outrage and uproar in response to this dishonorable agreement between Brussels and Tehran has gone beyond the political spectrum, as academics and scientists are voicing strong positions in condemnation.
Professor John Matter, a Nobel laureate in Physics from 2006 and chief scientist of the James Web space telescope program, wrote a letter to the Belgian Prime Minister, warning that freeing Assadi “would encourage more Iranian terrorism across the world and reassure Iranian officials that they could evade responsibility for major international crimes.”
NCRI President-elect Mrs. Maryam Rajavi accentuated that a global effort to defeat this shameful conspiracy will continue. Praising the strong stance of Iranian expatriates, MPs, jurists, dignitaries and political figures across the globe who are taking part in this ongoing campaign, Mrs. Rajavi added that noble nations of the world are fully aware and will not back down in the face of such infamy.