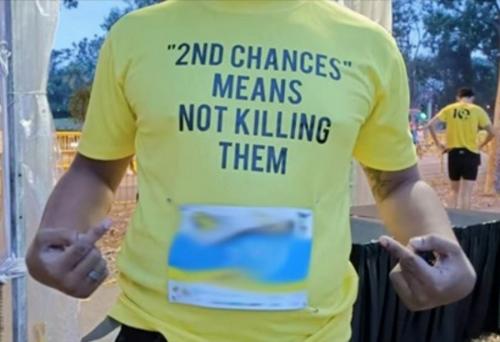 A Singaporean couple who wore anti-death penalty t-shirts at a running event are under investigation for violating tough laws against public protests, police said on 18 September 2019.
The city-state's laws against dissent and street demonstrations make it illegal for even one person to hold a protest without a police permit.
Nafiz Kamarudin, 38, and his 30-year-old wife wore the t-shirts at a run on 15 September organised by local group the Yellow Ribbon Project aimed at showing support for ex-offenders and their efforts to re-integrate into society.
They bore the words "2nd CHANCES MEANS NOT KILLING THEM" on the front and "#ANTIDEATHPENALTY" on the back.
Kamarudin, co-founder of a local NGO, told AFP that he and his wife were being investigated for "wearing t-shirts with a message of compassion".
"Tell me how can you promote the idea of giving ex-offenders a second chance if we send people to their death?"
The Yellow Ribbon Project advocates giving a second chance to former prisoners.
Police said that two people were being probed for offences under the public order act, punishable for first-time offenders with a fine of Sg$3,000 ($2,200). Repeat offenders can be fined Sg$5,000.
The prisons service, which supports the run, said that organisers of the event were made aware a week beforehand that a participant planned to wear a shirt with an anti-death penalty message.
Organisers contacted the man and advised him against using the event as a platform to advocate a cause but Kamarudin and his wife turned up wearing the t-shirts anyway, they said.
As he could not join the main pack with the shirt on, he ran separately on a road alongside the official route. His wife did not take part.