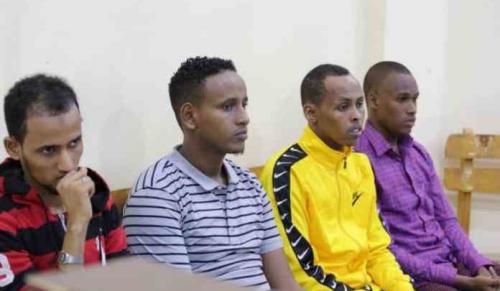 A military court in Mogadishu on 14 November 2019 sentenced two Al-Shabaab operatives to death and two others to life imprisonment for the murder of three soldiers and one civilian.
The court found Shuheb Abdullahi Mohamed and Sadiq Abdijab Hussein guilty of killing five people among them three soldiers and a civilian.
According to the court verdict, Sadiq was found guilty of belonging to Al-Shabaab assassination unit and for killing an ex-policeman named Mohamud Hassan Ibrahim in March 2019.
Shuheb Abdullahi Mohamed was charged and sentenced for the killing of three soldiers namely Hussein Moalim Ali Jilacow, Yusuf Abdullahi Mohamud and Abdullahi Ibrahim Hassan. The same defendant was also sentenced for the murder of a civilian named Abdi Ali Mohamud who was buying meat from a butchery in the outskirts of Mogadishu.
The court also sentenced Mohamed Osman Ahmed and Ismail Aweys to life in prison for their attempted murder of a lady selling khat in Mogadishu. Their plot failed after police officers stopped and arrested them while they were on a motorcycle armed with pistols.
The defendants can appeal the sentencing.