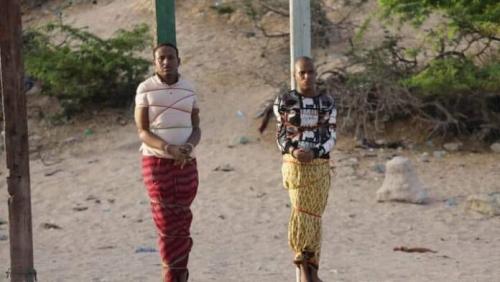 Somali military court on 24 October 2022 executes by firing squad two Al-Shabab operatives in Mogadishu after being found guilty of murdering several people.
Blindfolded, hand-cuffed, and tied to poles, Shuayb Abdullahi Mohamed and Saadaq Abdi Jabar were shot dead in a police academy early in the morning.
Shuayb Abdullahi Mohamed was convicted for killing 4 people including 3 security officers, between 2017 and 2018. Sadaq Abdijabar Omar was convicted of killing a soldier in 2019.