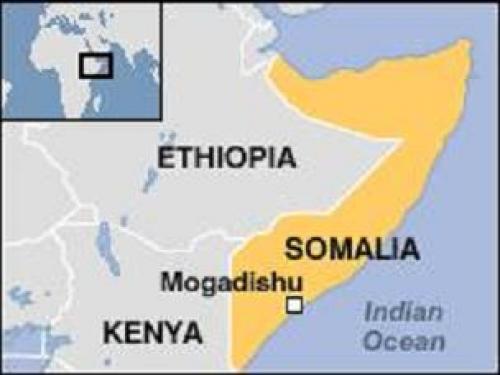 a Somali teenager killed a man convicted by an Islamic court of murdering his father in what is believed to be Mogadishu's first public execution under Sharia Islamic law in a decade.
At a heavily attended event ordered and supervised by the court, 16-year-old Mohamed Moalim approached the condemned man, Omar Hussein, who was hooded and tied to a pole, and stabbed him to death, witnesses said.
A crowd of several hundred watched as Moalim repeatedly knifed Hussein in the chest, neck and head in accordance with the court's ruling that found him guilty of murdering the boy's father two months previously, they said.
"My father's killer is now gone," Moalim calmly told AFP at the conclusion of the open-air execution in Mogadishu's south-central Bermuda neighborhood.
Moalim's relatives said both they and Hussein's family had accepted the verdict of the court, which was hailed by Islamic spiritual leaders in Bermuda as just and a sign that order was being restored to the lawless capital.
"Islam is the only solace to overcome the difficulties we are facing," said Sheikh Ibrahim Mohamed Nur, an imam. "The justice of Allah has been implemented and there is no better justice than what Allah recommended."
"The public is aware in Bermuda from today on that killers won't go unpunished as they did in the past," he told AFP.
But others, including some from Hussein's extended family who complained they had not had a chance to pay compensation to Moalim's relatives and possibly head off the execution, expressed concern.
"Our man was not given justice," said Ismail Haji Hassan. "You cannot stop violence by another sort of violence," said a young bystander who gave his name only as Mohamoud.