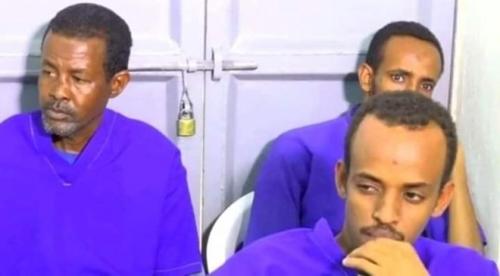 Puntland authorities in northeastern Somalia on 11 February 2020 executed two men by firing squad for the gang rape and murder of a 12-year-old girl, a government official said, adding it would serve as a warning to others in a country where crimes against women have rarely been punished. A third man who had been sentenced to death in the same case was instead released after paying the "blood money".
The girl - Aisha Ilyaas Aden - was abducted at a market in northern Puntland’s Galkayo town in February last year. Her body was found the next morning near her home. She had been gang-raped, her genitals mutilated, and strangled to death.
Abdishakur Mohamed Dige e Abdifitah Abdirahman Warsame were executed on 11 February.
“This is a clear indication that justice is served in Puntland,” Puntland’s Justice Minister Awil Sheikh Hamid told a news conference. “It is a worrying alert for those who try to carry out crimes against women and girls.”
Three men were convicted and sentenced to death in May last year. The decision was upheld by an appeal court in June.
Abdisalan Abdirahman Warsame, who is the brother of Abdifitah Abdirahman Warsame, was not executed following negotiations between the two families.
A relative of the victim confirmed that Abdisalan had been released on 20 February after an agreement to pay the family 75 camels as compensation for the girl’s rape and murder.
“I am upset at how the third man was left out. In Puntland, and in Somalia in general, rape victims don’t get justice due to the involvement of traditional leaders,” said Ubah Mohamed from the Somalia Gender Hub, a women’s rights advocacy group.
“I am against such matters being handled through customary laws and traditions. This is a major problem in our judicial system and it undermines the rights of women and girls.”
Officials from the ministry of justice declined to comment.
Rape is pervasive and often goes unpunished in much of Somalia, where decades of conflict have fueled a culture of violence and weakened institutions meant to uphold the law.
Victims have traditionally been forced to accept compensation - often in the form of camels or livestock - and marry their assailants, a centuries-old practice designed to end war between rival clans.
Women’s rights campaigners said violence against women would never end as long as customary laws allowed for agreements to resolve such crimes.
Instead of enforcing the law, authorities had “allowed for rape cases to continue being reviewed under (the) traditional mechanism”, tweeted @SagalAbas, an activist with the British charity Oxfam, using the hashtag #justice4Aisha.