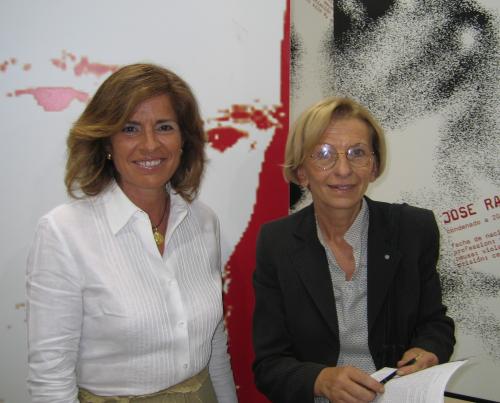 44 panels with the images of some of the 75 activists detained in March 2003 by the Castro regime in Cuba are part of the exhibition inaugurated in Madrid in the presence of the Euro MP Emma Bonino and City Councilor for Employment Ana Botella.
Two years after the wave of arrests on the Caribbean island, on the basis of Law 88, dubbed as the “gag law”, Hands Off Cain and the Madrid City Council are promoting an exhibition realized by Oliviero Toscani and entitled “Thought is forbidden: the faces of repression in Cuba”.
The exhibition is made up of great black and white panels hanging from a metal structure, showing  the faces of the dissidents accused of ‘betrayal of the motherland’ or ‘political conspiracy’ and, in the words of HOC Secretary General Sergio D’Elia ‘creates a claustrophobic feeling’ when one passes by.
Bonino emphasized the ‘Cuba that we know nothing about, where no freedom exists’ and added ‘it’s not the happy isle of socialism and liberty that for so long they have tried to show us.’
During her intervention, Ana Botella insisted on the need for ‘all political parties, independently of their ideology, to raise their voice against this dictatorship.’
Botella also pointed out the ‘implausible’ fact of being jailed for having a typewriter or a fax machine and that there are people in Cuba who do not know what it means to live in a free country, since Fidel Castro took over power in 1959.
“Thought is forbidden: the faces of repression in Cuba” has been on show in Italy and will remain open in Madrid until June 9 before moving on to Granada, Valencia and Bilbao. The exhibition will then be showing in Holland, France, Sweden and the United States.