THAILAND. TWO SENTENCED TO DEATH FOR MURDER OF BRITISH STUDENT 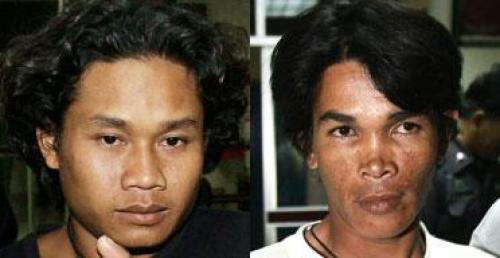 two Thai fishermen, Bualoi Posit, 23, and Wichai Somkhaoyai, 24, were sentenced to death for the rape and murder of student Katherine Horton after an unusually short trial and sustained political pressure.
"The court has ruled them guilty of all the crimes they were charged with and imposes the maximum penalty," judge Jamnong Sudjaimai told the two men in the packed courtroom in Thailand’s southern province of Surat Thani.
"Such brutal and torturous behaviour of those two have shocked society, therefore the court sentenced them to death for committing murder to hide their crime," Jamnong said.
Posit and Somkhaoyai, who faced execution by lethal injection, had pleaded guilty on January 12 to charges of rape and the pre-meditated murder of the 21-year-old Horton on the resort island of Samui.
Police said the pair had watched pornographic movies on their boat before swimming ashore to rape Horton, who was on holiday on Koh Samui with a friend over the New Year. Horton's body was found in the sea off the Samui beach on January 2 and her killers were arrested on January 9. Three days later they were charged in court.
After they were sentenced, the two men looked grim as they faced reporters and television crews who packed the courtroom.
"I am sorry for what I have done," Wichai said. "I apologise for ruining the country's image." The whole process from arrest to trial was unusually quick for Thailand, where tourism is an important industry, after the case drew the attention of international media.