TUNISIA: LAUNCH OF A NETWORK OF LAWYERS AGAINST THE DEATH PENALTY 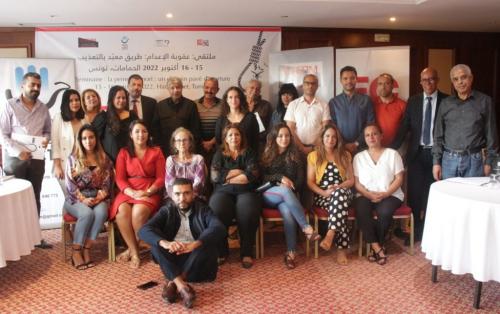 The Tunisian Coalition against the Death Penalty (CTCPM), in collaboration with ECPM, the Organization against Torture in Tunisia (OCTT) and the Danish institute against torture (Dignity) on October 15 and 16, 2022, organized lawyers in Hammamet, on the sidelines of the 20th World Day Against the Death Penalty.
This seminar was a continuation of the first training course for actors in the criminal justice chain in Tunisia organized in May 2022 and aimed to create a network of lawyers against the death penalty.
23 participants, including lawyers and a psychologist, met for two days during which they discussed, in particular, the link between torture and the death penalty and worked on the development of a charter for the creation of a network of lawyers. This meeting was particularly marked by the participation of the Secretary General of the Tunisian Bar Association, the first representation of the Bar in an activity of the CTCPM and ECPM, who announced his commitment to continue the organization of joint actions.
Mr. Chokri Latif, President of the CTCPM, Ms. Jo-Anne Prud’homme du Hancourt, Director of the Tunis Office of DIGNITY, Mr. Hassen Toukabri, Secretary General of the Tunisian Bar Association and Ms. Anna Dubarle, representing the team international programs at ECPM gave opening speeches in which they notably recalled the state of the death penalty in Tunisia, in the region and in the world.
The program of the first day continued with two panels.
The first consisted of interventions by Me Mondher Cherni, lawyer and secretary general of the OCTT, with a presentation on torture and the death penalty in international law and Tunisian law; and Mr. Chokri Latif who reviewed the history of the death penalty in Tunisia from the reign of the beys and French colonization, to independence and the Tunisian revolution.
After a long time of exchanges and debate, the presentations resumed with a second panel composed of Me Ahmed Seddik, a lawyer, who attended the trial of Saddam Hussein and shared his testimony highlighting the unfair, vindictive and inhuman aspect of trial and enforcement; and Mr. Hatem Hacheche, Doctor of Psychology, who highlighted the psychological impacts of the death penalty, akin to torture, at the trial, detention and execution stages, both on the condemned but also on his family and the executioner.
The first day ended with the intervention of Me Mohamed Messaoudi, Moroccan lawyer and member, since its creation in 2013, of the Network of lawyers against the death penalty in Morocco. He returned to the experience of setting up the network as well as the activities carried out within its framework: round tables, visits to prisons, bills, etc.
The last morning was devoted to a group workshop during which the lawyers were able to discuss and draft a founding text for the creation of a Tunisian network, based on the charter of the Moroccan Network made available by Me Messaoudi.
A final text was ratified by all the lawyers present and the seminar concluded with the announcement of the creation of the first Network of Tunisian lawyers against the death penalty.
This activity was organized within the framework of the joint project of the CTCPM and ECPM “Strengthening progress towards the abolition of the death penalty in the Maghreb”, co-financed by Norway and the French Development Agency.