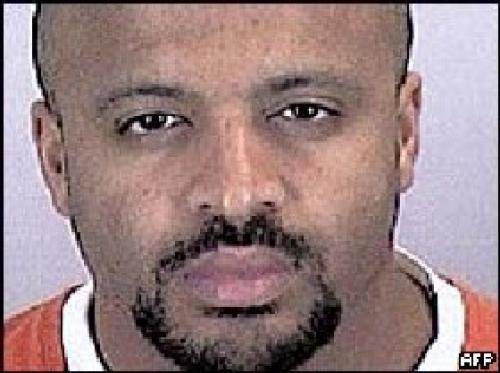 a divided jury spared the life of Zacarias Moussaoui, deciding to send to jail for the rest of his life the only man tried on US soil for the September 11, 2001 terrorist attacks. Inside the court house, Moussaoui sat silently, occasionally grinning at the defence lawyers. But as he was led away, he shouted: "America, you lost. I won."
The verdict, which is binding on the judge, was reached after jurors worked through 42 criteria factors on Moussaoui including a childhood destroyed by an abusive father and a neglectful mother.
The jury's decision came as a surprise to legal commentators, who had expected that the magnitude of the toll from the September 11 attacks would sway the jury towards a death sentence.
It was thought that the highly emotional content of the trial, which included painful testimony from dozens of relatives of those killed on that day and the dramatic cockpit recording of Flight 93, which crashed in a field in Pennsylvania, made execution a near certainty.
The decision is also bound to disappoint the Bush administration, which had maneuvered for the trial to be held in Virginia because the state allows the death penalty and because the court house is only a few miles away from the Pentagon, which was also attacked on that day.
But, in the detailed verdict, it appeared that the jury did not accept the prosecution's main argument - that Moussaoui, who was already in jail at the time of the September 11 attacks, had caused the deaths of 3,000 Americans because he misled FBI investigators, and so prevented them from thwarting the al-Qaida plot to strike a blow to the heart of the United States. Instead, the jury concluded that Moussaoui, a French citizen who came to the US to learn to fly jet airliners, played a minor role, if any at all, in the attacks.