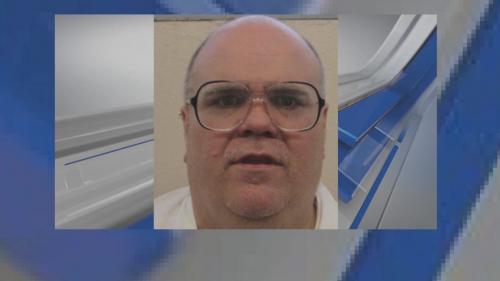 Alan Eugene Miller, 'execution survivor', reaches settlement with state
Alabama won't seek another lethal injection date for an inmate whose September execution had been halted because of problems establishing an intravenous line, according to the terms of a settlement agreement approved on Monday.
The state agreed to never use lethal injection again as an execution method to put Alan Eugene Miller to death. Any future effort to execute him will be done by nitrogen hypoxia, an execution method authorized in Alabama but that has never been used to carry out a death sentence in the US. There is currently no protocol in place for using nitrogen hypoxia.
On Tuesday, U.S. District Judge R. Austin Huffaker Jr. approved the settlement agreement in a lawsuit brought by Miller seeking to prevent another lethal injection attempt.
Miller was scheduled to be executed by lethal injection on Sept. 22, but the state called off the execution after being unable to connect an IV line to the 351-pound inmate. Miller said that when prison staff tried to find a vein, they poked him with needles for over an hour and at one point left him hanging vertically as he lay strapped to a gurney.
Alabama has acknowledged problems with IV access during at least four executions since 2018. Three of those had to be halted.
Earlier this month the execution of Kenneth Eugene Smith was halted after the execution team tried for an hour to connect an IV line. Last week, attorneys for Smith filed a lawsuit against the prison system, saying that the state violated the U.S. Constitution, various court orders and its own lethal injection protocol during the botched execution attempt earlier this month. Smith’s attorneys are asking a federal judge to forbid the state from making a second attempt to execute him, saying Smith was already “subjected to ever-escalating levels of pain and torture” on the night of the failed execution.
Alabama also called off the 2018 execution of Doyle Lee Hamm for the same reasons. He reached an agreement with the state that prevented further execution attempts, although he remained on death row. He later died of natural causes.
Prison officials blamed time constraints, specifically the midnight deadline, for the 3 halted executions.
The state’s July execution of Joe Nathan James was carried out, but only after a 3-hour delay caused at least partly by the same problem with accessing an IV line.
Last week Alabama Gov. Kay Ivey announced a pause on executions in order to review the procedures. The Republican governor cited concern for victims' families.
Miller was sentenced to death after being convicted of a 1999 workplace rampage in which he killed Terry Jarvis, Lee Holdbrooks and Scott Yancy.
The settlement agreement likely prevents another execution attempt in the near future since Alabama has not announced procedures for using nitrogen hypoxia, and there will be litigation over the humaneness of the method before a state tries to use it.