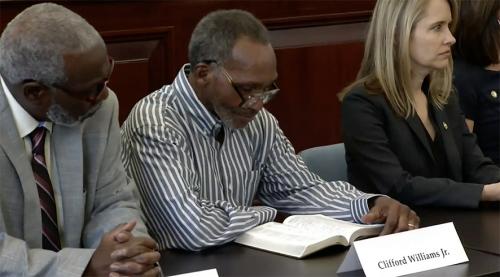 Clifford Williams (center) reads from his Bible during the news conference announcing his exoneration. His nephew, Nathan Myers (left) was also exonerated. To their right is Shelley Thibodeau, director of the Florida Fourth Judicial Circuit State Attorney’s Conviction Integrity Unit.

Florida Governor Signs Bill Authorizing $2.15 Million Compensation for Death-Row Exoneree Clifford Williams. Williams, who was freed in 2019 after spending 43 years in prison, will receive $2.15 million in compensation from the state of Florida under a bill signed into law by Governor Ron DeSantis on June 9, 2020. The bill, specifically tailored to compensate Williams, unanimously passed both chambers of the Florida legislature in March. Williams and his nephew, Nathan Myers, were wrongfully convicted of murder in 1976. Both received jury recommendations for life sentences, but the trial judge overrode the jury’s verdict and sentenced Williams to death. Myers, who was 18 at the time of the murder and was sentenced to life, has already received $2 million in compensation. However, Williams was ineligible for compensation under Florida law because he had previously been convicted of two unrelated crimes. The legislature took up the compensation bill to redress that inequity. The preface to the bill states, “the Legislature acknowledges that the state’s system of justice yielded an imperfect result that had tragic consequences in this case…. The Legislature is providing compensation to Clifford Williams to acknowledge the fact that he suffered significant damages that are unique to Clifford Williams for being wrongfully incarcerated.” Williams and Myers were tried and convicted in 1976 for the murder of Jeanette Williams (no relation to Clifford Williams) and the wounding of her girlfriend, Nina Marshall. Marshall told police that two men had entered their bedroom at night and fired shots from the foot of the bed. She identified Williams and Myers as the shooters. However, the physical evidence — never presented by defense counsel — revealed that the bullets had been fired from outside, shattering the bedroom window, and had come from a single gun. Defense counsel also ignored forty alibi witnesses whom Williams and Myers had indicated would be able to testify that they had been at a birthday party next door at the time of the shooting. The defense presented no witnesses. The Florida Supreme Court overturned Williams’ death sentence in 1980 and resentenced him to life with the possibility of parole after 25 years. Neither man was granted parole. Prosecutors began reinvestigating the case after newly elected State Attorney Melissa Nelson created the first Conviction Integrity Unit in the state in 2018. The unit issued its report, authored by Conviction Integrity Review Director Shelley Thibodeau, in February 2019. The report noted that no physical evidence linked Williams or Myers to the shooting and that “the physical and scientific evidence actually contradicts Marshall’s testimony about what happened.” The report also found that another man, Nathaniel Lawson, had confessed to several people that he had committed the killings and that a 1976 police report noted his presence near the crime scene around the time of the murder. Thibodeau concluded that “the culmination of all the evidence, most of which the jury never heard or saw, leaves no abiding confidence in the convictions or the guilt of the defendants.” Williams’ exoneration follows a pattern familiar in Florida death-penalty exonerations. In 21 of the 23 Florida exonerations for which the jury’s sentencing vote is known, judges imposed the death penalty by overriding a jury recommendation for life or following a non-unanimous jury recommendation for death. Williams was added with number 167 to the Innocence List of the DPIC.