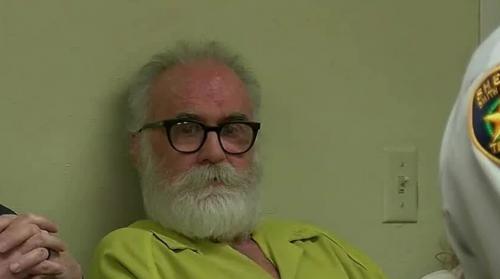 Tracy Beatty executed on November 9
A jury convicted and sentenced Tracy Beatty to death in August 2004 for the killing of his 62-year-old mother, Carolyn Click.
The 61-year-old man received a lethal injection at the state penitentiary in Huntsville, said Texas prison spokeswoman Amanda Hernandez. He died at 6:39 p.m. local time Wednesday.
He is the fourth inmate to be put to death in Texas this year and the 13th in the United States.
Hernandez reported that Beatty’s last words were: “Yes, I just want to thank (pause) I don’t want to leave you baby, see you when you get there. I love you. Beatty, who had a long white beard and long gray-white hair, also offered thanks to fellow death row inmates and named several of them. “I love you, brothers. See you on the other side.”
As the powerful sedative took effect, Beatty took two deep breaths, mumbled something unintelligible, and began snoring. Seventeen minutes later a physician pronounced him dead.
Beatty’s lawyers say he was denied a proper psychological evaluation before he was scheduled to be executed Wednesday evening after the Supreme Court unanimously ruled against blocking his killing. Beatty fatally strangled his mother after an argument in November 2003 and buried her body outside her mobile home in Whitehouse, about 115 miles southeast of Dallas.
The Supreme Court on Wednesday declined the request to stop Beatty’s execution. His lawyers had appealed after a district judge dismissed a request that the Texas Department of Criminal Justice unshackle Beatty’s hands while he underwent a mental evaluation in September. The judge cited a lack of jurisdiction in turning down the request. A neurologist and a psychologist hired by Beatty’s legal counsel argued in court records that Beatty was unable to complete the evaluations if his hands were shackled. The tests, experts said, required his hands to be free. “If Mr. Beatty is shackled and unable to participate in these evaluations, his ability to seek available remedies will be harmed,” Beatty’s lawyers said in court documents. One expert who examined Beatty said he “is clearly psychotic and has a complex paranoid delusional belief system” and that he lives in a “complex delusional world” where he believes there is a “vast conspiracy of correctional officers who … ‘torture’ him via a device in his ear so he can hear their menacing voices,” Beatty’s attorneys wrote in court records. In 2021, the Texas Department of Criminal Justice started allowing inmates to be unshackled during an expert evaluation if a court granted permission. Beatty’s lawyers intended to file for clemency and other legal remedies after the experts evaluated their client. But a week before Beatty’s scheduled execution, the U.S. Court of Appeals for the 5th Circuit sided with the district court and denied his lawyers’ request to block the execution. On Monday, the Texas Board of Pardons and Paroles unanimously declined to commute Beatty’s death penalty sentence to a lesser sentence or to postpone it for 6 months. Beatty’s execution was rescheduled on 3 previous occasions.
Beatty is the 4th inmate executed this year in Texas and the 577th ever since the state resumed executions on December 7, 1982. Beatty is the 13th inmate executed in the United States this year and the 1,553th. ever since the nation resumed executions on January 17, 1977. Next week, the last execution of the year in the United States, that of John Hanson, is set in Oklahoma.