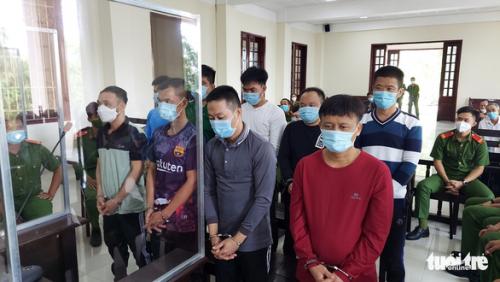 The People’s Court in the Mekong Delta province of Dong Thap on 3 August 2022 sentenced seven people to death for illegally transporting over 45 kilograms of narcotics in 2020.
The death penalty was handed down to Le Duy Linh, Tran Van Thuc, Nguyen Minh Thiet, Huynh Van Ly, Le Van Thanh, Nguyen Van Thai, and Nguyen Trung Hieu.
All were convicted of the illegal transportation of narcotics, though Linh was also found guilty of trading, possession of narcotics, and organization of illegal drug use.
An eighth and ninth individual also present at the trial received a life sentence and 20-year sentence, respectively, for drug-related offenses.
The indictment showed that police in Dong Thap caught Thai transporting 45.3 kilograms of narcotics, including over seven kilograms of heroin, ten kilograms of methamphetamine, 11.3 kilograms of MDMA, commonly known as ecstasy, and nearly 17 kilograms of ketamine, at around 10:00 pm on 15 August 2020 to carry out a transaction in Ho Chi Minh City.
Officers later expanded their investigation and arrested six other suspects.
The final two individuals surrendered themselves.