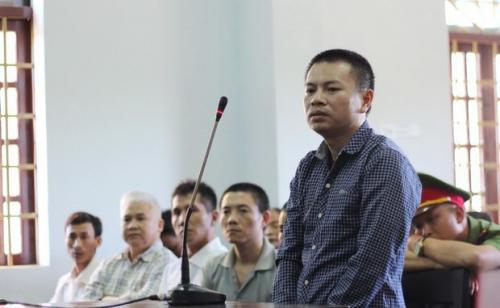 Vietnamese President Nguyễn Xuân Phúc has commuted the death sentence of Dang Van Hien and reduced it to life in prison, Hien’s wife, Mai Thi Khuyen, told RFA on 15 September 2022.
Hien was sentenced to death by the Dak Nong People’s Court in January 2018 for shooting employees of the Long Son Company who had come to confiscate his home and land in October 2016.  Three people were killed in the incident and 13 injured.
“[I am] extremely happy and moved. Everyone in our family cheered, relatives from both sides [her and his relatives] and friends, all are sending us their congratulations,” Khuyen told RFA. She said that since her husband’s arrest, her family has encountered significant financial difficulties. She has had to work as a farmer to support her family and pay compensation to the victims of the incident.
Hien’s sentence was widely controversial in Vietnam, where authorities regularly authorize private companies to appropriate land for large-scale projects, often at the expense of individual landowners. The Ho Chi Minh City’s High-Level People’s Court upheld Hien’s sentence at an appeal trial six months after his conviction.
Del. Luu Binh Nhuong, who serves as the deputy head of the National Assembly's Committee on People’s Aspirations, said in October 2019 that he had forwarded a petition from Hien’s lawyers asking for leniency to his committee to Nguyen Phu Trong, who at the time was president of Vietnam, state media reported.
The petition described Hein as a hard-working farmer without a prior criminal record and argued that the shooting was the result of emotional stress, anger and pressure that employees from the Long Son Company, including the victims, had put on Hien at his residence. The petition said that the employees carried out an unlawful eviction despite Hien’s protests.
In July 2018, then Vietnamese President Tran Dai Quang publicly requested the Supreme People’s Court, the Supreme People's Procuracy and the Ministry of Public Security investigate Dang Van Hien’s case.
The reassessed sentence, which moves Hien off death row and into life imprisonment, appears to end a years-long process that caught the attention of Vietnamese citizens from across the country, many of whom expressed frustration at the government’s land appropriation policies.