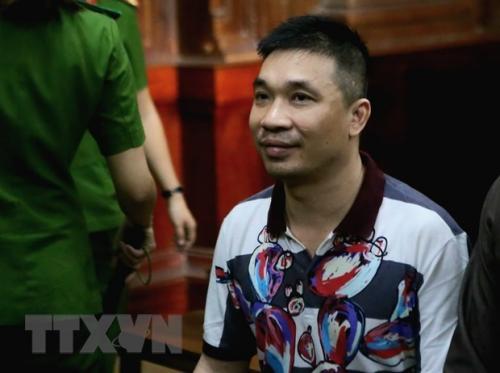 The People’s Court of HCM City on 27 July 2020 handed down five death sentences and four terms of life imprisonment to defendants involved in a major drug ring led by Van Kinh Duong.
The case was the biggest drug production crime brought to light in 2017.
Born in 1980, ringleader Duong was sentenced to death on five charges of illegally producing and trafficking drugs, cheating to appropriate assets, escaping from prison, and counterfeiting the seals and documents of agencies and organizations.
The death penalty was also imposed on Nguyen Duc Ky Nam, who directed the production of the drugs, Le Van Mang, Pham Bao Quan, and Le Huong Giang, for their assistance to Duong.
Nguyen Ba Thanh, Nguyen Thu Huyen, Pham Thu Huyen, and Nguyen Dac Huy were sentenced to life behind bars.
Duong’s fiancée Vu Hoang Anh Ngoc received 16 years in prison for the illegal possession of narcotic substances.
The jury said the defendants’ deeds were extremely dangerous for society.
According to the verdict, Duong was sentenced to five years in prison for robbery by the court in Hanoi’s Hoan Kiem district in 2008. While serving his time, he was found on 11 October of the same year to have stored drugs, and was given an additional seven years.
While imprisoned in Thanh Hoa province, he and four other inmates escaped from prison in November 2010 and fled to HCM City, where he rented an apartment in a high-end residential area using the name Tran Ngoc Hieu. In June 2016, he became acquainted with a person named Tom at a bar, where they agreed to produce methamphetamine.
Duong later ordered his accomplices to rent a villa and buy chemicals to produce crystal meth. The gang changed the location of their production constantly to avoid being detected, moving from HCM City to Nha Trang city and then to Dong Nai province.
Police in HCM City arrested the gang following a tip-off in 2017.
Investigations revealed that Duong and his accomplices had produced 124 kg of drugs. About 84 kg were given to Tom and the remainder was used to make nearly 500,000 ecstasy tablets, which weighed 120kg in total and were concealed in coffee bags.
Before their arrest, the ring had sold 18 kg in Hai Phong city.