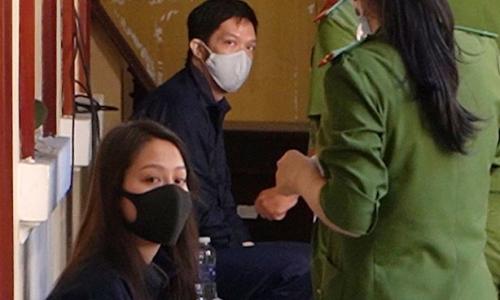 A woman who had beaten her fiancé's daughter to death in HCMC last year was sentenced to death on 25 November 2022, while the father received eight years in prison.
The HCMC People's Court gave Nguyen Vo Quynh Trang, 27, the death sentence for murder, while the father Nguyen Kim Trung Thai, 36, received three years for torture and five years for concealment of crimes, totaling to eight years in jail.
The judge panel said that the law does not allow anyone to beat people, especially children. Because Thai’s family did not agree to Thai and Trang getting married and having children, Trang took her anger out on Thai’s daughter, it said.
Trang's action was thus particularly dangerous, as it was against children and for "vile motive," it said.
The trial against Trang and Thai drew particular attention from the public. The HCMC People's Court arranged 300 chairs to accommodate the public to follow the hearings, but a much bigger crowd, including people traveling from outside the city, meant many had to stand.
Police sent extra officers to maintain security and block roads around the court before the trial opened early on Friday morning.
Trang and Thai had lived together for over a year, from the time Thai divorced his ex-wife in 2020. Since that day, Trang had frequently beaten the little girl and forced her to do chores, investigation found. When rods broke due to repeated beatings, she switched to wooden implements.
On December 22 last year, Trang beat the girl so badly she fainted. The girl was taken to hospital but declared dead on arrival. Her wounds and bruises prompted doctors to contact police.