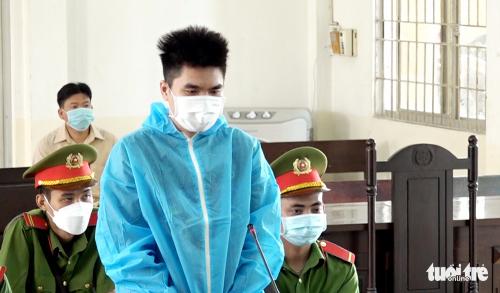 A man from Vietnam’s Mekong Delta region on 12 April 2022 was condemned to death for murdering his elder sister and stealing their parents’ money last year.
The People’s Court in An Giang Province gave Le Lam Truong, 27, capital punishment for murder and robbery during a trial on 12 April.
The indictment showed that Truong’s parents operate a pawn shop at their home in Chau Thanh District, An Giang.
On 7 March 2021, the parents needed to visit a hospital in Ho Chi Minh City for health check-ups, so they asked Truong and his elder sister – 36-year-old Le Thi Kim An – to watch over the house.
At around 9:00 pm the same day, An went to bed with her 10-year-old daughter inside her room, while Truong lied in a hammock at the front of the house.
The man then thought about killing his sister and stealing his parent’s money and gold to pay his debts and for personal spending.
Truong waited until the neighbors fell asleep before taking an iron stick to An’s room.
After An let Truong in the room, he hit her head from the back till the victim collapsed on the floor.
Truong covered An’s mouth and strangled her until she was motionless.
He then broke open his parent’s closet and took VND100 million (US$4,300) and six gold rings.
After Truong left the house, An’s daughter called her father on her phone.
The victim was rushed to the hospital but she had already died.
Truong sold the gold rings at several shops in Ho Chi Minh City, the Mekong Delta city of Can Tho, and southern Ba Ria-Vung Tau Province for a total of VND152 million ($6,600).
He used the money to buy a new phone, accessories, and other items.
The murderer was arrested in the central city of Da Nang on 13 April 2021.