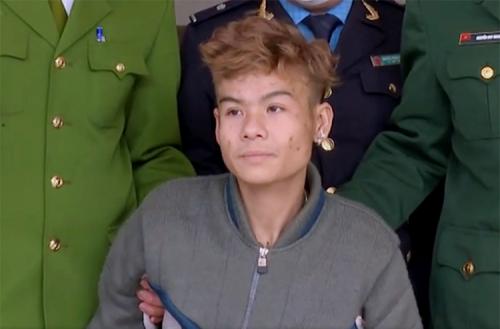 Tang at the time of his arrest

Pham Van Tang, 32 years old, was sentenced to death on 26 August 2022 in Vietnam for driving a motorbike carrying 9 kg of drugs and running at police while under siege in Vu Quang district.
The first-instance judgment of the People's Court of Ha Tinh province declared Pham Van Tang, residing in Son Giang commune, Huong Son district, guilty of illegal possession of narcotics, according to article 249 of the Penal Code.
According to the indictment, around 10 pm on 25 January, Ha Tinh police secretly dressed and ordered to stop Tung's motorbike at Ho Chi Minh Street, the section through Huong Minh commune, Vu Quang district, for suspicion of transporting prohibited goods.
Authorities allege, Tung increased the throttle to run, crashing the car into a group of policemen standing in front to escape. After a few hundred meters, he was restrained. At the scene, the functional force collected 9 kg of synthetic drugs and ketamine.
Donated to declare that the above drugs originated from Laos, was contacted by an unknown man, asked for transportation to the South, and after the job, he will be paid a salary of 40 million VND. Giving the partner 20 million VND to transfer in advance "as a news".
On January 25, the partner called Tang, asked to go to the border area of ​​​​Vu Quang district to receive drugs, and told him to find a way to send goods by passenger car to the South for consumption. Donated and received the bag, put it on the motorbike to go home, when it was revealed in Huong Minh commune.