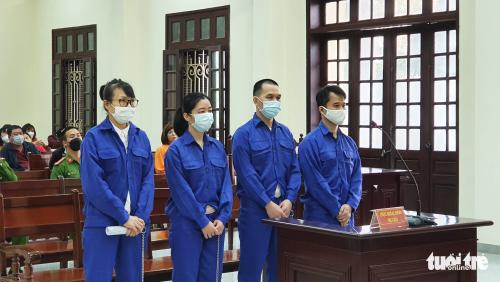 The high-level People’s Court in Hanoi on 5 April 2022 upheld the death penalty handed down to the former director of a bank branch in Hai Phong City, northern Vietnam for embezzling VND414 billion (US$18.1 million).
The second-instance trial of Tran Thi Kim Chi, former director of the OceanBank branch in Hai Phong, and three other defendants concluded on 5 April, with the court rejecting the appeal of all four of them.
At the first-instance trial on 4 September 2020, the Hai Phong People’s Court sentenced Chi to death for embezzlement.
Le Vuong Hoang and Nguyen Thi Minh Hue, who were the financial controller and accountant at the bank, received a life sentence, while Chu Van Nha, the treasurer, was given a 20-year prison term for the same offense.
From 2012 to August 2017, Chi directed Hoang, Hue, and Nha to create 109 fake savings books, fake account settlements, and false loan applications to appropriate nearly VND414 billion from the bank deposit, according to the indictment.
The prosecution agency determined that Chi was mainly responsible for the appropriated money and the damage caused to the bank, while the remaining defendants were held jointly accountable.
At the appellate court, Chi insisted that the capital punishment is too harsh as she did not appropriate money from the bank and customers for personal gain, adding that she has no idea where the appropriated money is.
The jury stressed that the case is especially serious, resulting in damage and losses to national property, thus a strict punishment is necessary to deter similar offenses.
Chi was also required to return VND353.5 billion ($15.4 million) and nearly $2.8 million she had embezzled from OceanBank.
Hoang, Hue, and Nha were required to pay over VND40 billion ($1.7 million) worth of interest.