YEMEN: THREE PAEDOPHILES PUBLICLY SHOT THEN HANGED FROM A CRANE 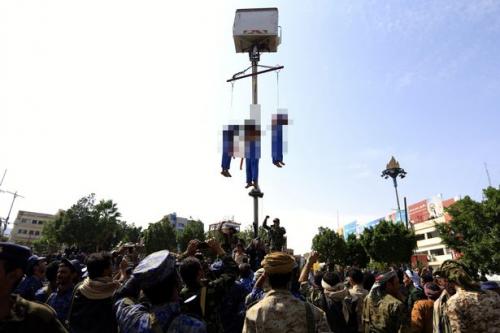 Three paedophiles were publicly shot then hanged from a crane in Yemen as punishment for raping and killing a ten-year-old boy.
Disturbing pictures show the rapists in blue overalls paraded in front of crowds in the centre of Sana'a, the country's largest city.
They were handcuffed, ordered to lie face down and shot five times in the heart.
Their corpses were then winched high into the air by a crane where they were left hanging as a grim warning to other potential offenders while onlookers took pictures on mobile phones.
The death penalty can also theoretically be used in cases of Islamic or 'Hudud' offences under Sharia law such as adultery, sexual misconduct, sodomy, prostitution, blasphemy and apostasy.
All sentences are carried out by shooting although stoning, hanging, and beheading are also permitted within the Yemeni penal code.